In the wee hours of the morning today, the Fraser passed a symbolic threshold: discharge at Hope is now above 10,000 cubic meters per second.  To my fellow oceanographers, who talk about ocean currents and measure things in millions of cubic meters per second, that’s a laughably small number.  But for a river, that’s big!  The long-term average peak flow at Hope is only about 8,700, so the current flow is already above average.  The latest predictions from the Ministry of the Environment say the water level will continue to rise through tomorrow on account of the unseasonably warm weather.  What’s more, a cold snap in April actually added snow to some areas, so there could even be some extra water to melt now!  The point is, this year’s freshet has been a nail-biter and Mother Nature’s antics aren’t through yet. 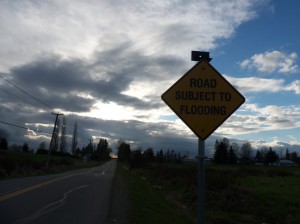 Langley, BC, just barely behind the dike

This local hydrologic milestone was accompanied by a more widely publicized event this week, when the Mauna Loa Observatory recorded atmospheric carbon dioxide (CO2) concentrations above 400 ppm for the first time.  Just like water flow in the Fraser, the atmospheric CO2 concentration rises and falls each year as plants take up lots of the gas during the growing season, then decay during fall and winter releases most of that CO2 back into the air.  But the CO2 record, which started at Mauna Loa in 1958, has shown an unmistakable trend on top of that yearly wiggle: each year, the maximum concentration is slightly higher than the year before it.  The result is that the annual average CO2 level is about 25% higher than when they started monitoring 55 years ago, and 45% higher than before the Industrial Revolution, mainly from the burning of fossil fuels like coal and oil.

While the atmospheric CO2 concentration continues to rise steadily from year to year, the effects on Earth’s ecosystems will develop more gradually and in complex ways.  The most straightforward impact is on the air temperature: CO2 is a greenhouse gas, meaning it traps long-wave radiation trying to escape out of the atmosphere.  The average global air temperature has already gone up by 0.6°C (about 1°F), and that number will continue to rise no matter what countries do about CO2 emissions.  How will rivers respond to the temperature increase?  Hydrologists studying the Fraser have already identified slight changes in the timing of water flow: the freshet is coming earlier than it used to.  Over the next few decades, winter flow will increase and late summer flow will decrease.  This has important consequences for the communities living on the river (like the >2 million people in the greater Vancouver area) who depend on flood management programs designed for a pre-global-warming Fraser.  With warming air, the temperature of the water will also go up.  This is critical for the salmon migrations of the Fraser River; late summer river temperatures are already at or near the threshold for salmon survival in many parts of the basin.  The effects of these changes on the forest, other aquatic organisms, and the chemistry of the river will also have important impacts on the health of this watershed and the people living in it.

As ecosystems around the world pass historic thresholds like these, it’s important to consider how we got here and where we’re headed.  What will the Fraser and other rivers look like in 5 more years?  What about 50?  Our research on the chemistry of Fraser River water is important for informing community decisions about how to protect and manage vital resources now and into the future.  We all have to watch the signs so we understand the impacts our actions have on the Earth, and hopefully learn to make more informed choices down the road!