Welcome back to the Fraser River expedition blog! Over the next three weeks, we will be posting updates and musings on our experiences collecting samples from across lower British Columbia. For information about our previous expedition last October, see the posts below. 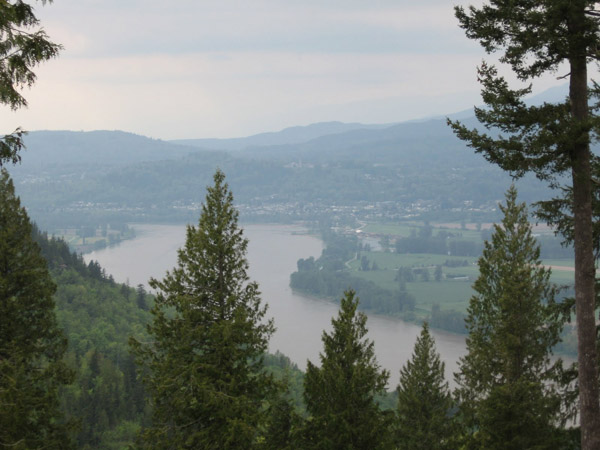 Bernhard and I flew into Vancouver yesterday and today we were joined by Chris Linder, a photographer who will be documenting our expedition. In lieu of science, today we took the opportunity to meet up with local collaborator Steven Marsh from UFV and daughter Sarah, undergraduate students Garrett and Jenna, and John fromNature Conservancy Canada. We met at Sumas Mountain, one of many small peaks jutting abruptly out of the Fraser floodplain near Abbotsford. This afternoon, John gave our group a guided tour of a small patch of stunning intact old growth forest on Sumas Mountain.

Today’s post is brought to you by the letter F. Wandering through the forest was like taking a step back in time. After leaving the logging road, we followed a barely detectable trail over rich, spongy soil and surrounded by towering cedars and maples. Every surface was covered with moss and ferns. There was no trace of nearby civilization: the hum of Highway 1, the rattle of passing trains, or even views of the towns below at clearings quickly faded away. We stopped at trees that have been dated to many hundreds of years, and one so old its age isn’t exactly known because the center has rotted out. However, John explained that this could all change in a matter of days, as developers are eagerly pursuing permits to begin clearing the native vegetation from this area in order to build homes on five-acre lots, which are already creeping up the side of Sumas Mountain. The Nature Conservancy has been fighting this campaign in an effort to preserve the critical habitat found in this small area, which is home to a number of endangered plant and animal species found nowhere else in Canada. 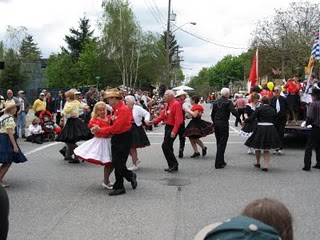 The other important F word today was Fort Langley. This historic town boasts the title of the first European settlement in the lower Fraser Valley, established as a fur trading post by the Hudson’s Bay Company in 1827. As such, it bears historical significance in the province, which was on display at the reconstructed fort (a National Historic Site complete with period character interpreters) and during today’s Victoria Day parade. For us, Fort Langley is notable as the site of our time series sampling (near the old ferry dock), which has been carried out by UFV students and faculty since fall 2009. We will report more on the incredible dataset these students have helped generate when we return on Wednesday.

Of course, the most important F word of our expedition is Fraser, the river that connects people and ecosystems across lower British Columbia. This year is special because we are sampling during the freshet period, when the water flow peaks due to spring rainfall and snowmelt in the mountains. It should be an exciting time to see the river!