Last week saw just about the nicest weather you could hope for in the Fraser Valley.  In addition to making the water sampling ridiculously pleasant, the solid week of warm sunshine jump-started the snowmelt and the river level is on the rise!  It’s a good thing I got to B.C. when I did, because if this is really the freshet, it’s an unusually early start. 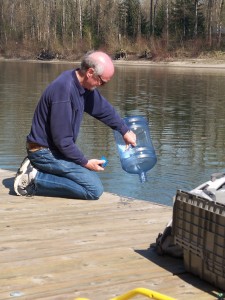 I had a visit over the weekend from some field assistants my parents, who graciously spent their holiday helping me schlep equipment back and forth between the dock, my car, and the “lab.”  We also took advantage of the weather to make some riverside picnics, including a visit to Matsqui Park under the Mission Bridge.  This is the site of the official Fraser River flood height marker (second photo).  The flood crests from 1948 are immortalized in many places around the basin, but as you can see, the flood of 1894 was even greater.  The estimated maximum flow rate at the peak of the 1894 flood was more than twice the average peak flow of the Fraser!  Imagine trying to fit twice as much water in a river channel as it flows across a wide, flat floodplain.  Obviously, you can’t – that’s why they’re called floodplains.  The Fraser Valley today is protected by dikes in most areas, but a large flood would certainly be a damaging event. 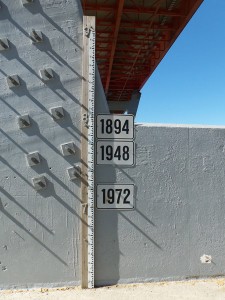 The spring freshet is mainly the product of snowmelt.  In 2011 and 2012, above-average snowpack across the basin resulted in much larger freshets than normal, and the reverse was true in 2010.  Peak flow in 2012 was the 4th highest on record (since 1912), while 2010 was the 3rd lowest.  This year, snow depths are more or less average, so I expect this to be an average water year.  Of course, winter isn’t necessarily through in the mountains, but the recent warmth suggests there won’t be any more snow build-up.  Major Fraser River floods are characterized by two factors: sudden melting of large snowpacks and heavy rains.  As I psych myself up to go sampling for the first time in the rain, let’s hope 2013 only meets one of those criteria.