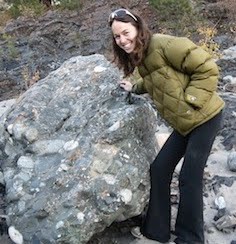 Major ions and DIC can tell us a lot about what types of rock are being weathered within the drainage basin, and DIC together with its radiocarbon value can inform about the degree of air-water exchange that takes place during river transit and the contribution of “old” carbonate rock material. Nutrients serve the dual purpose of describing biological activity within the river, as well as possible contamination from industrial and agricultural activity (think of issues like the Mississippi River dead zone). Trace metal concentrations are another potential indicator of industrial contamination, while the radiogenic isotope systems of some of these elements are indicative of bedrock age and weathering processes. The deuterium content of riverwater is a climatic indicator of the temperature of the precipitation that contributes to the river’s discharge. Colder precipitation (higher latitude and/or altitude) has less deuterium, so the D/H we measure in the river tells us about the source of the water itself (glacial melt, local runoff, etc.).

Each of these samples has its special requirements for preservation and storage. Some require cold temperature and dark to prevent outgassing and photodegradation (nutrients, optical properties, incubations), others acidification to stop biological activity (DOC, DON). DIC samples are very sensitive to contact with atmospheric gases, so in addition to poisoning to kill bacteria, we must seal them in special glass bottles with fancy grease to ensure total cutoff from the outside world. Trace metal concentrations in river water are so low that contamination with small amounts of dust can give erroneous measurements, so these samples are collected in specially acid-cleaned plastic bottles and stored in plastic bags. You can imagine an instruction sheet for this protocol going on for many pages and requiring lots of equipment. But after a few stations, we developed a rhythm and we can now fill all our bottles in a matter of about an hour. And in truth, our vehicle is stuffed to the gills with our gear when travelling from one base lab station (hotel room) to the next. But in the end, our sampling is nicely streamlined in this second campaign and the high-quality samples we are collecting should provide a great foundation for establishing what is possible in other basins.

We are now almost to the delta in our downstream journey. Coming up: adventures in lignin extraction with UFV undergrads!