I’m back here in B.C. for a quick, but action-packed, visit to the Fraser.  Last weekend was the opening of the “My River, My Home” science-art exhibit at the Fraser River Discovery Centre (FRDC) in New Westminster.  This exhibit was the culmination of an outreach program facilitated by the Global Rivers Observatory which solicited artwork from children living in the river basins we study depicting their river.  Initiated by student volunteer samplers in the Siberian Arctic in 2006, the program has since expanded to the Fraser, Congo, and Ganges basins.  Kathleen Bertrand and Shannon King at the FRDC and Steven Marsh at the University of the Fraser Valley, photographer Chris Linder, and many others poured endless effort into this exhibit over the last three years, and it was wonderful to finally see it presented to the public.  The exhibit also includes hands-on scientific demonstrations of water quality measurements, which will become teaching kits for local schools.  I hope this exhibit and the related activities will spur further projects that bring young people closer to their natural surroundings through personal experience with both science and art. 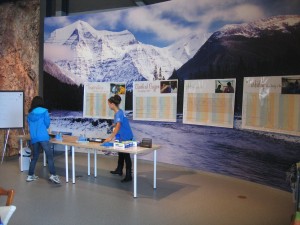 Hands-on demos of turbidity and dissolved oxygen measurements for visitors to the Discovery Centre (B. Peucker-Ehrenbrink)

The second reason for my visit is very particular: to collect a depth profile of suspended sediments.  River sediments are tricky research subjects.  While the water just looks muddy from above, beneath the surface, turbulent currents and gravity and shear forces influence how different types of sediment are distributed throughout the water column.  Since all sediment is denser than water, the concentration of sediment generally increases the deeper you go.  And the denser the particle, the deeper it is likely to fall in the channel as it’s tossed around by currents.  The result is a continuum, from the surface to the bed, of low concentrations of fine-grained material to high concentrations of coarse material.  To make matters worse, these particles don’t just differ in size.  Fine material has distinct sources and weathering history, and very different chemical composition, from coarse material.

As you might imagine, it can be quite difficult to collect a sample that captures all this heterogeneity!  A single surface sample won’t do.  There are myriad specially-designed samplers floating around (so to speak) for acquiring a flow-proportional amount of water from every depth, or discrete samples from specific depths.  But every sampler is designed for very specific conditions and analytical objectives.  In a world of sneakers and sandals, I need an out-of-stock designer ice skate, size 15½.  Luckily, our colleague Josh West at USC is in possession of such a rare beast, and was willing to share it with me on short notice.  And it is truly a beast, with a capacity of 10 liters and weighing in at 30 kilos (65 lbs.) empty.  It even has a tail and jaws that will slice your fingers off.  But this is what it takes to collect enough sediment for my sample-hungry geochemical measurements.

The other thing you need for this kind of sampling is a good boat.  It turns out that Jeremy Venditti’s group at Simon Fraser University has access to the perfect boat.  Jeremy’s team, along with folks from the Water Survey of Canada, have been performing regular transects of suspended sediment depth profiles throughout the summer.  I joined them for one of their sampling trips in June, during high flow.  I’m back now to repeat the adventure for their last sampling trip of the year, as the Fraser has returned to near-winter baseflow.  I hope to make a comparison between the high-flow samples and these low-flow samples to see how variable, both in time and throughout the water column, the geochemical composition of Fraser River sediments is.

These samples will also allow me to make a solid estimate of the average composition of the total sediment load, which hasn’t been accomplished here—or most elsewhere—before.  Knowing the average chemical composition of river sediments is very important for understanding how sediment—and carbon—travels within a river basin.  The geology of a river basin imparts distinct geochemical signatures on the material that erodes and collects in river channels as suspended sediment.  Depending on the topography, climate, and many other factors, sediment can be carried quickly through some areas and stored for thousands of years in others.  Carbon from plants, bacteria, fungi, and algae can hitch a ride on the these sediments, and their association can determine how much of the carbon makes it to the ocean, where the sediments deposit.  The river carbon (derived from atmospheric CO2 converted into plant matter and incorporated into river sediments) in ocean sediments is cut off from the atmosphere for millions of years.

This slow leak of carbon out of the atmosphere has been a major control on earth’s climate on the geologic past.  Today, carbon cycling in rivers is being disrupted by land use changes, water extraction, pollution, and warming air temperatures.  It’s crucial to study relatively pristine rivers like the Fraser in order to understand how these impacts are affecting the natural ecosystem processes of rivers under greater stress.  It’s amazing the story behind a little bit of mud!