A wise man named Eddie Izzard once said “I’m covered in bees!” I think we can all relate to this scenario after today’s sampling experience, during which we were attacked by hordes of ravenous mosquitoes. It did, however, prove a powerful of incentive, as we’ve never collected samples to efficiently! We suspect that the high water levels across the basin have created large areas of inundation here in the northern peneplain region, meaning lots of stagnant standing water, i.e. mosquito breeding grounds. We’re hoping that as we gain elevation tomorrow heading into the Rocky Mountains, the insect threat level will decrease. 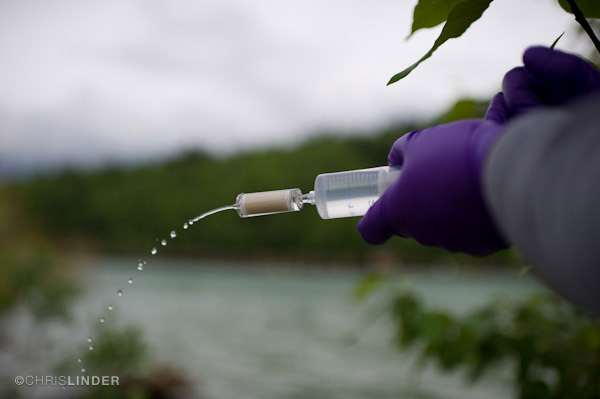 I wanted to use today’s post to talk about a new sample we’ve added to our repertoire for this trip. The main focus of most of our samples has always been to characterize the geochemistry of river water and sediments. But that’s only part of the story. A river system is comprised of inorganic and organic components, which includes living organisms. We don’t yet have a comprehensive idea of the biological communities living within the river: phytoplankton and algae creating plant matter, invertebrates feeding on plankton, and microbes consuming organic matter associated with particles. So this time we are collecting a special filter sample (first photo) from which DNA will be extracted by Marco Coolen and his lab at WHOI. This will serve as a broad “who’s there” survey of the microbial community living on the particles we collect for chemical analyses. It will be interesting to link this biological information to the geochemical picture we have of the Fraser basin and attempt to understand which organisms and metabolic processes may be transforming the chemical signatures we measure. And it’s always fun to work a little outside your scientific comfort zone! 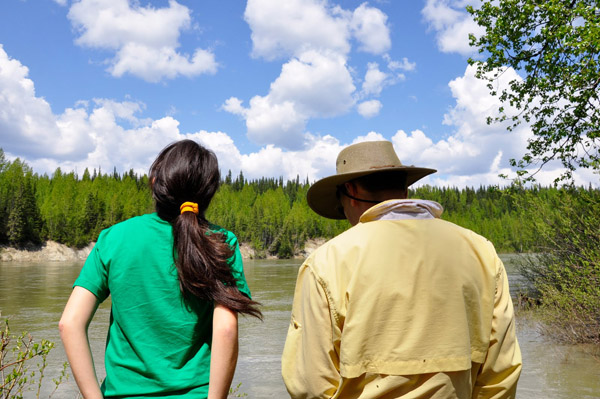 Our team also has a new member: incoming WHOI student Sarah Rosengard, who joined us yesterday by flying straight from her graduation at Brown to Prince George. She’s jumped right into the action helping collect samples and filter back in the hotel room. And fortunately her first day wasn’t entirely mosquito-filled misery; conditions at our first sampling site, the McGregor River, were pleasantly bug-free and sunny (second photo).

Tomorrow we have a long drive to Valemount, a small town in the Rockies, which will be home base for our last few sampling sites in the headwaters before we head back to the floodplain. The residents of Prince George bid us farewell tonight with an impromptu parade of music and cheering from cars passing by our hotel. Well, it might have been to celebrate the Canucks first Stanley Cup final victory over the Bruins, but I think it’s open to interpretation.