Since the last post, we’ve covered quite a bit of ground. After finishing our Hope station yesterday morning, we hit the road for Lytton, stopping at Hell’s Gate on the way. Hell’s Gate is a spectacular spot near the end of the Fraser Canyon where the river narrows to the point that, at high flow, it is as deep as it is wide. The result is a torrent of rapids and massive whirlpools. Whole trees rush by and collect in backeddies, forming huge debris rafts. The view is quite spectacular and, despite the occasional drizzle, we were joined by many other tourists at the visitor’s center. 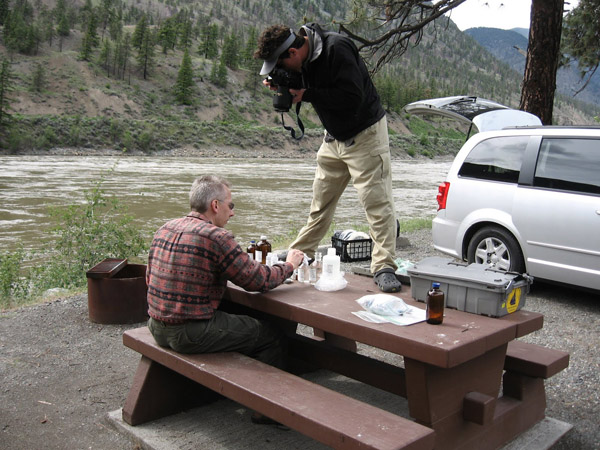 The next stop was Lytton where, in the past, we have efficiently sampled both the Thompson (the Fraser’s largest tributary) and the Fraser mainstem at stations very close to one another. We soon encountered trouble, however, when we discovered that this beach site was now completely inundated, and we could not reach an area where the Thompson and Fraser were completely separated. Consulting our map, we decided we needed to head upstream to find an accessible site. Eventually we arrived at Goldpan Park and got down to sampling. The sun even made a brief appearance, and Chris took a break from shooting cool underwater videos to document the science action (see top photo). 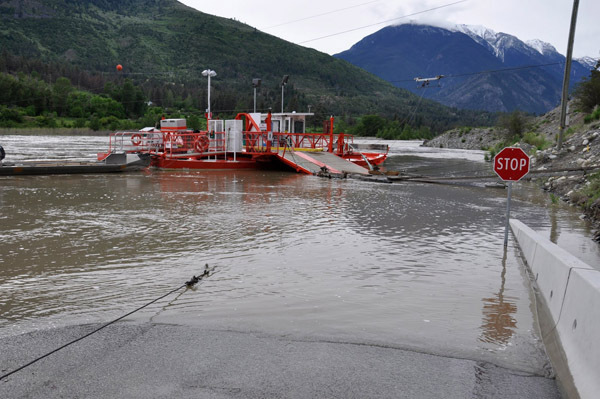 Trying our luck again in Lytton, we returned to our site at the reaction ferry, which is out of operation during the freshet because of unsafe current speeds and debris flows (which leaves a stretch of 130 km between Yale and Lillooet without a crossing of the Fraser). Sampling here was also not feasible because of the high water! (see second photo) So on we drove to Lillooet…

This morning at the Bridge River above Lillooet we encountered yet more difficulty finding a sampling site. This time, the high flow of the Fraser created a small branch of flow over what we previously knew as land, which was flowing back some ways into the Bridge River. The possibility of mixing between the Fraser mainstem and the Bridge tributary made us wary of this site, but the canyon walls through which the Bridge flows are nearly vertical everywhere, so we had no alternatives. So we collected a few samples at our original site, and enjoyed the scenery (including a bald eagle stalking a portion of river for its lunch).

Tomorrow we move on yet again. Unfortunately, we must leave Lillooet without a visit to the Jade Museum, one of our favorite stops in the Fraser Canyon. The Lillooet area is a historic mecca for minerals; more recently people have started exploring its jade deposits, but back in the 1860s the town served as the jumping-off point for erswhile gold miners. Many businesses still have a gold rush flavor: Goldpanner Restaurant, Hotel de Oro, Mile 0 Motel. Most of the easily mined gold has already been removed, but some people still carry the torch for the Fraser gold fields – we even met such a man in Hope!