As I struggled to fill the first of five small bottles with filtered water this afternoon, I decided I was finally ready to accept that the freshet has started. It’s a miracle I can type at all right now, given the strain my hands have endured today. Don’t believe me? I invite you to come over and give it a try. I’ve already had another visit from helping hands, this time UFV students Audrey and Rosalie (photos). Even though the fact that I’m here sampling means they don’t have to go out like they usually do, they’ve offered to come and help me! Little do they know what the river has in store for us… 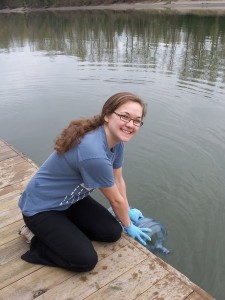 Aside from the filtration challenge, this change in the river’s composition also has a chemical side. The main inspiration for this sampling campaign is to characterize the sudden shift in flux and (most likely) composition of dissolved organic carbon (DOC) that occurs during the freshet. Unfortunately, DOC doesn’t make itself known quite as obviously as sediment. To see DOC, I need eyes with a slightly different light spectrum from my own.

That’s where my friend the submersible fluorometer comes in. This device shines ultraviolet light at the water, which excites electrons in organic molecules (sadly, my eyes can’t do that either). These molecules then emit energy as visible light, which the sensor detects. The amount of fluorescence depends on the amount of organic compounds in the water, so fluorescence values should be correlated to DOC concentrations. My fluorometer is submersible, which means I can drop it straight into the river and record fluorescence in the field. 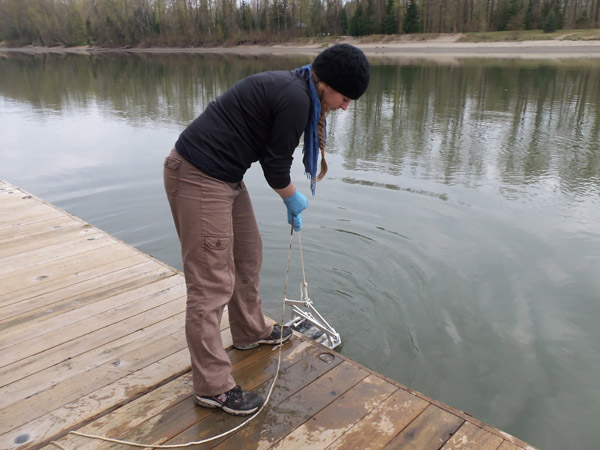 So I was very excited today to see that the fluorescence readings are finally rising above the noise – I’m willing to go on record now and say that the DOC pulse has begun! Hopefully I will watch it continue to rise and peak in the coming days, meanwhile collecting lots of water samples to make comprehensive chemical measurements back in the lab. But this probe, along with basic field measurements like temperature and pH, are telling me a lot already.